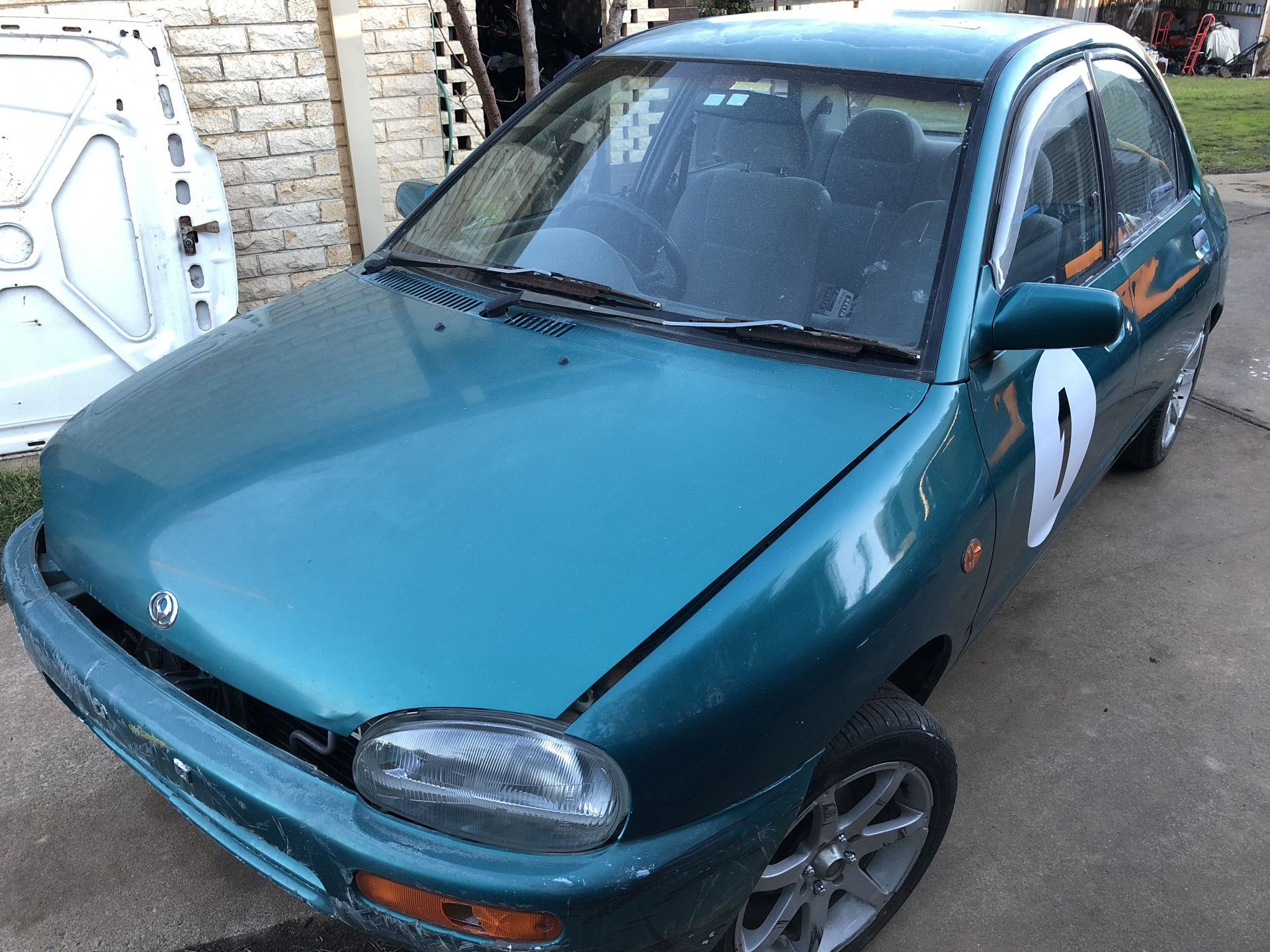 The new Small Car Cup series (https://www.drivetekmotorsport.com/small-car-cup) has enthused me, mostly because it appeals to my love of racing cheap shitboxes.

I built the blue BMW 316i for the outright Class B (<1600cc, <85kW, 195mm wide tyre) but the harsh reality is that it’s going to get hammered by a number of other vehicles. In particular, class B is going to become a GTi Swift benefit, sooner or later - they don’t have the best power, weight, brakes or gearing, but they absolutely have the best combination of these things, and that puts them miles ahead of anything else that’s legal.

So, I had a look at what is likely to work for Class A (limited to 63kW at the brochure, and a 185 wide tyre). Came up with two obvious contenders - and one of them is the 121 Bubble car!😁

At 62kW and 805kg, with reasonable sized brakes, they’re pretty much perfect for the class - almost everything else is significantly heavier and/or slower.

Actually finding a car proved more difficult than I expected, mostly because lots of the 1.5 litre cars were specced with autos. The fact that most sellers have no idea what motor their vehicle has, only makes things more difficult.

This car was a lucky find - I sold some Toyota extractors to a bloke and he mentioned that he had a friendly scrappy l, so I asked for the scrappy to keep an eye out for a Bubble car for me. Turns out that the scrappy had one that he’d been using to drive around his property with his 4yo son. And it was a 1.5 manual! 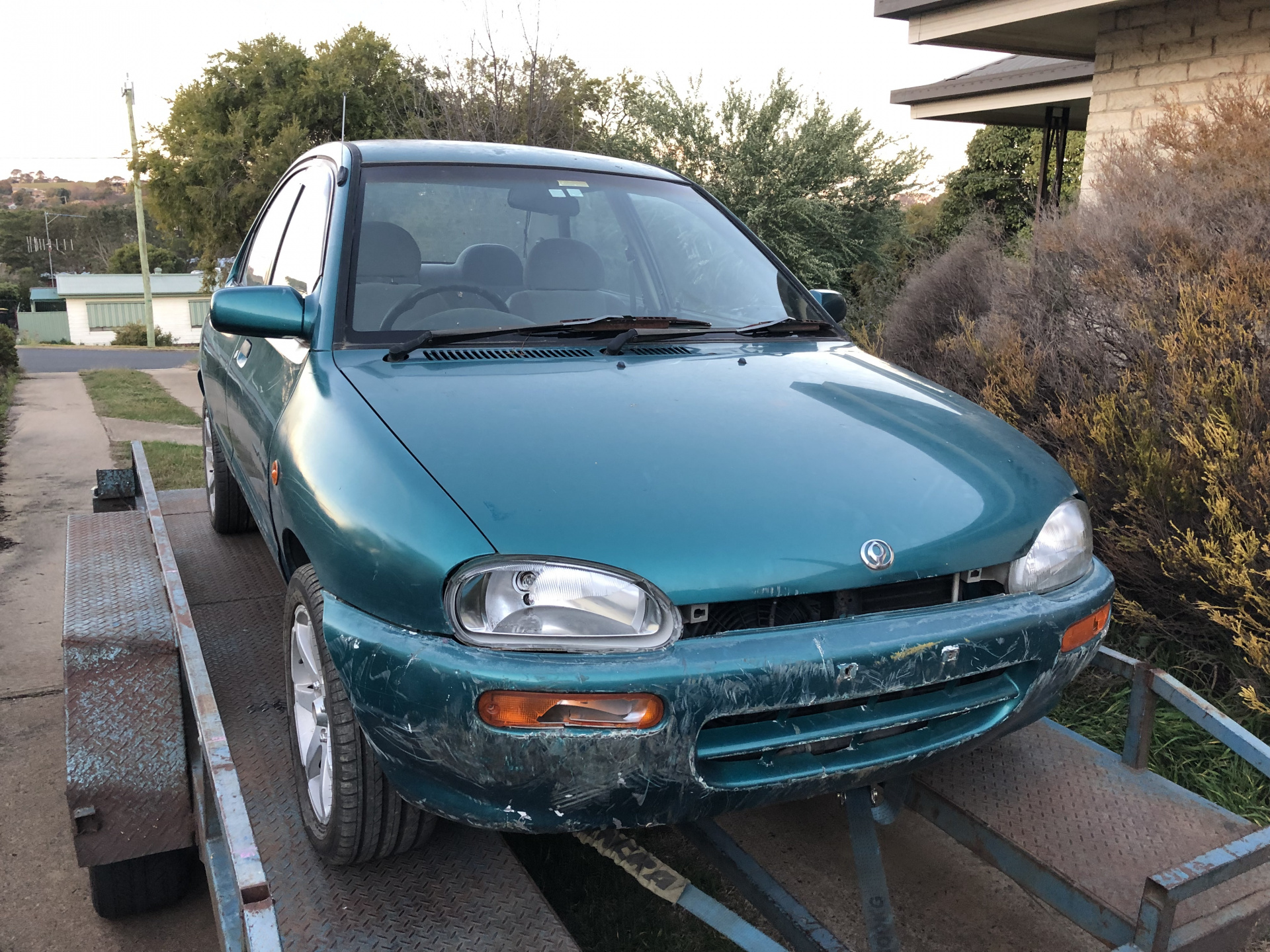 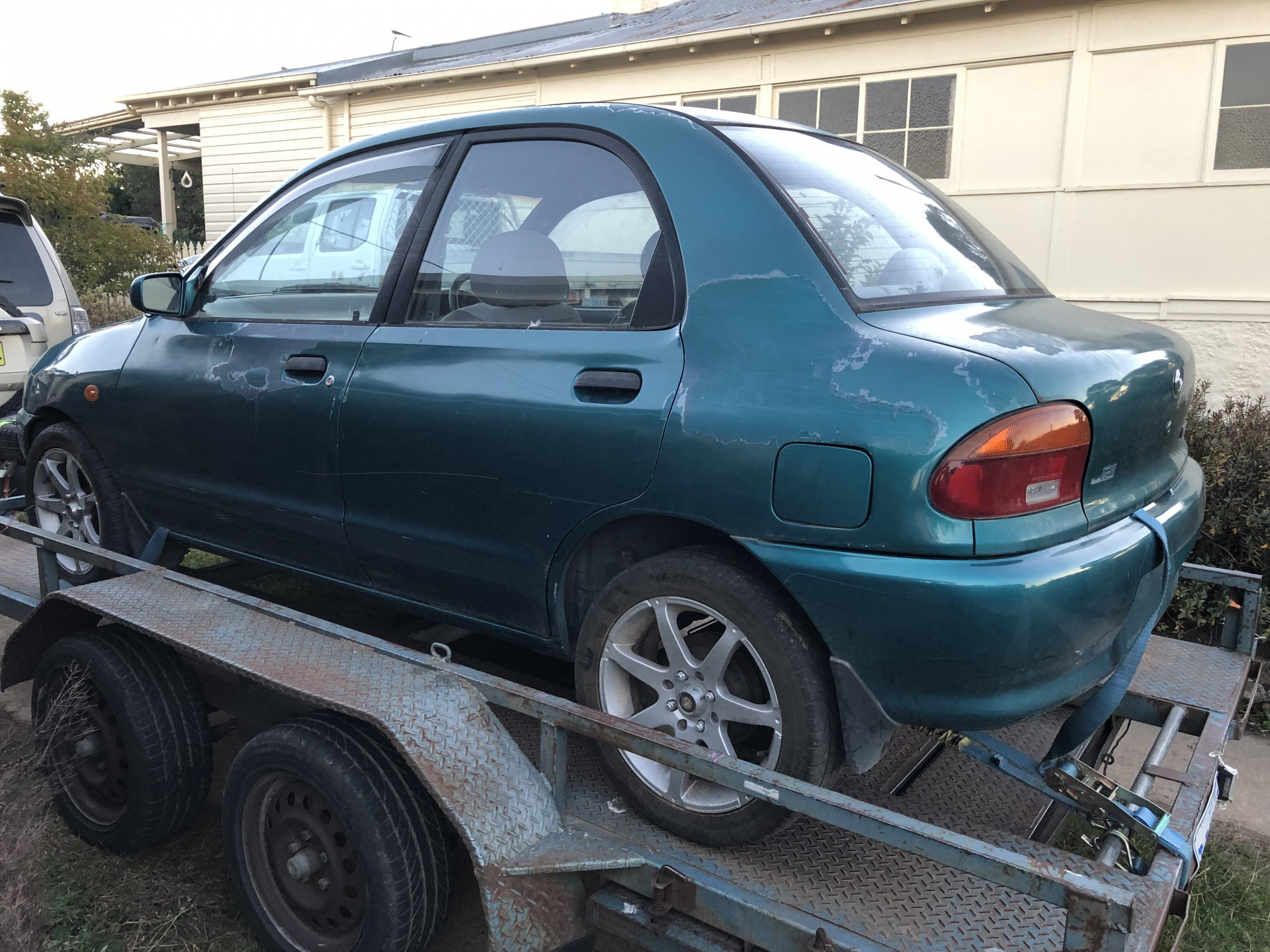 The front is battered because they’d been running down empty 44 gallon drums, but the only damage is what you can see.

I haven’t gotten stuck into it yet. Have worked out that S40/Mirage rear shocks fit in, and lower it nicely - or way too much if you use the original, short 121 springs... I need to work out what springs to use and how far to cut them, but my gut feeling is Mirage springs with a coil or two removed.

Main work so far has been on the paint, specifically the peeling clear coat.

Following my success with the green BMW, I started on the front passenger’s door. Sand off the flaky clear, smooth down the edges and spray new clear over the top.

This door had been repainted in the past, so the colour was lovely and thick - it came out well, and if I had more patience it could have been perfect. 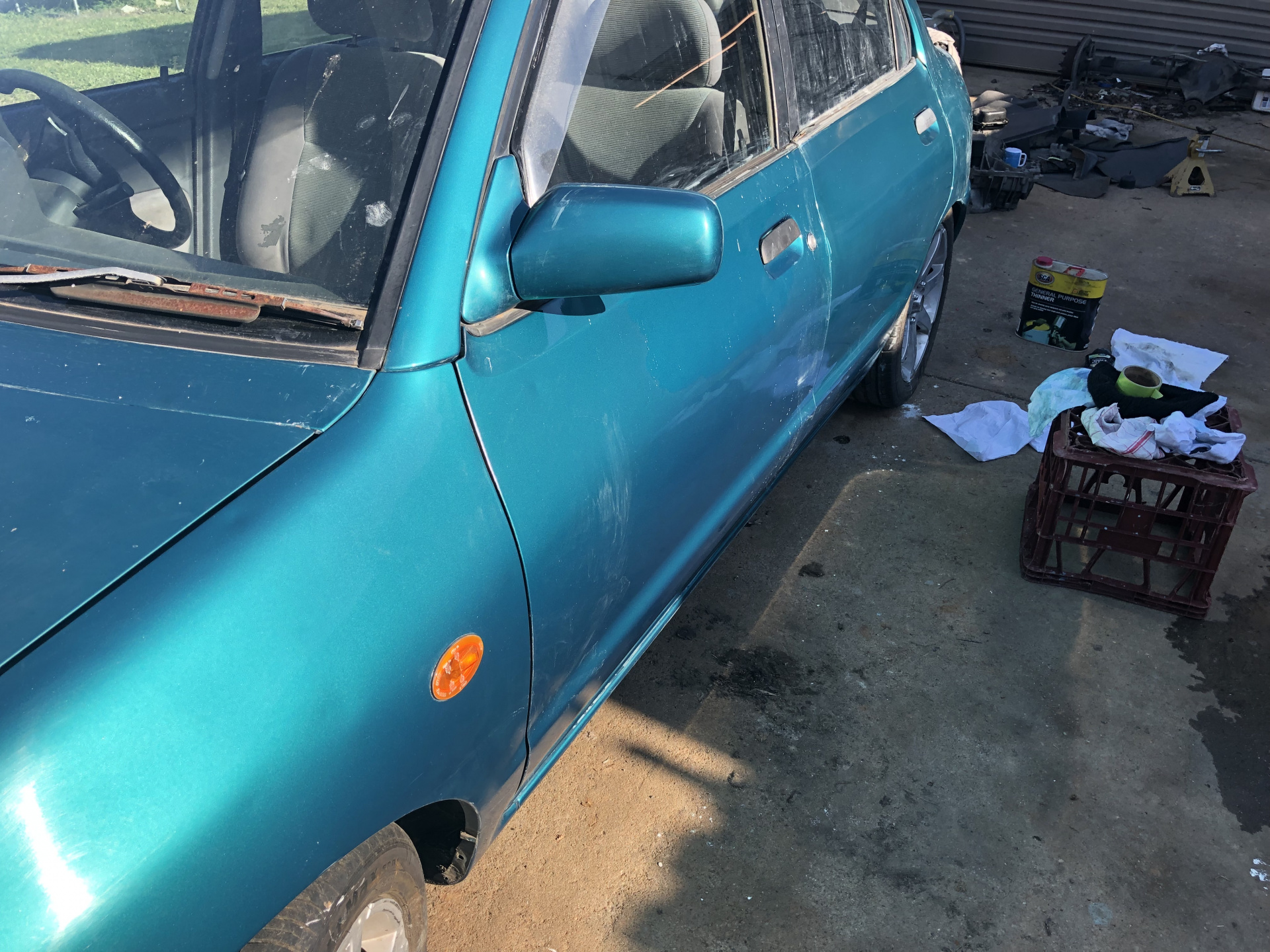 The bootlid was next, and it was basically a disaster. It had also been repainted in the past but the primer was lumpy and the colour and clear were very inconsistent in thickness.

Sanding off just the clear was pretty much impossible, and I went through to the primer in a number of places.

(sorry, these photos are in reverse order because OzVolvo). 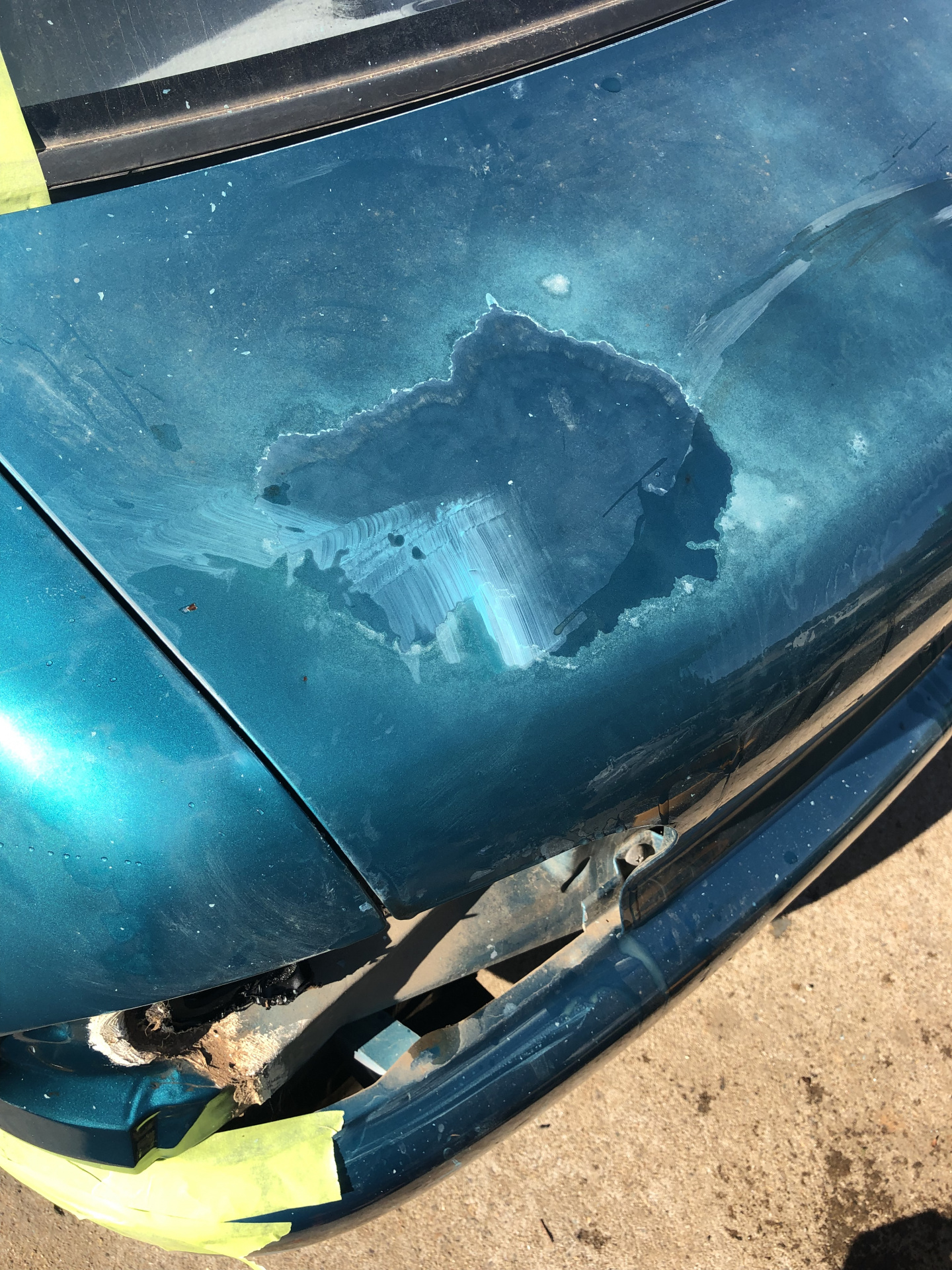 Funnily, putting clear over this mess still helped - presumably the shininess distracts from the different colours?

Still, I need to do something better than this. I tried to buy some paint this morning l, but Mazda has two versions of “Sparkle Green” and I don’t know which version I need.

Other option is a big sticker, but I haven’t put enough thought into that yet.

Rear quarter panel worked somewhere in between the door and bootlid - passable, but not great.

Roof is a work in progress. 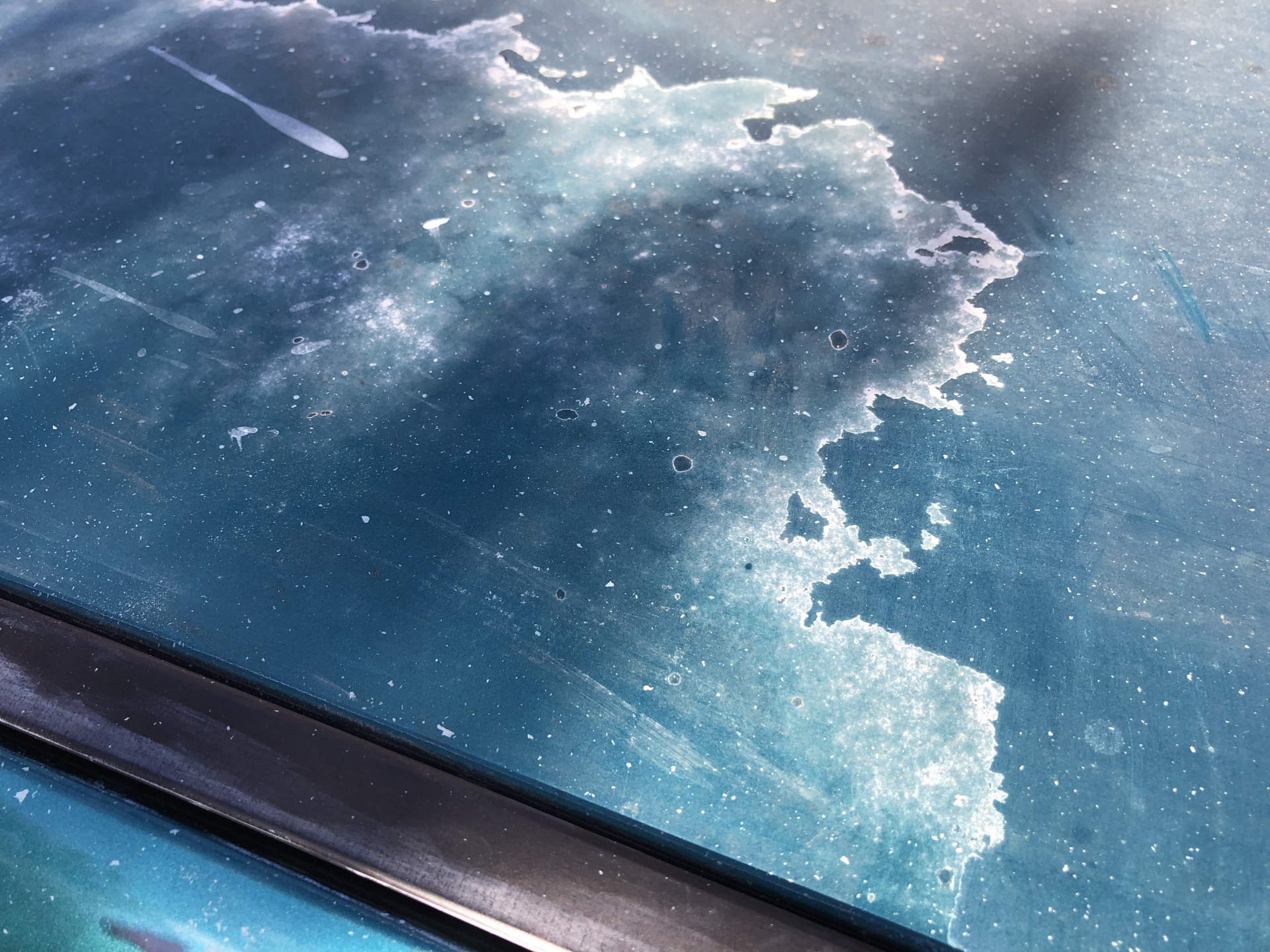 New technique was to scrape the clear off with a credit card, rather than using sand paper. Slow and noisy but doesn’t hurt the colour coat. 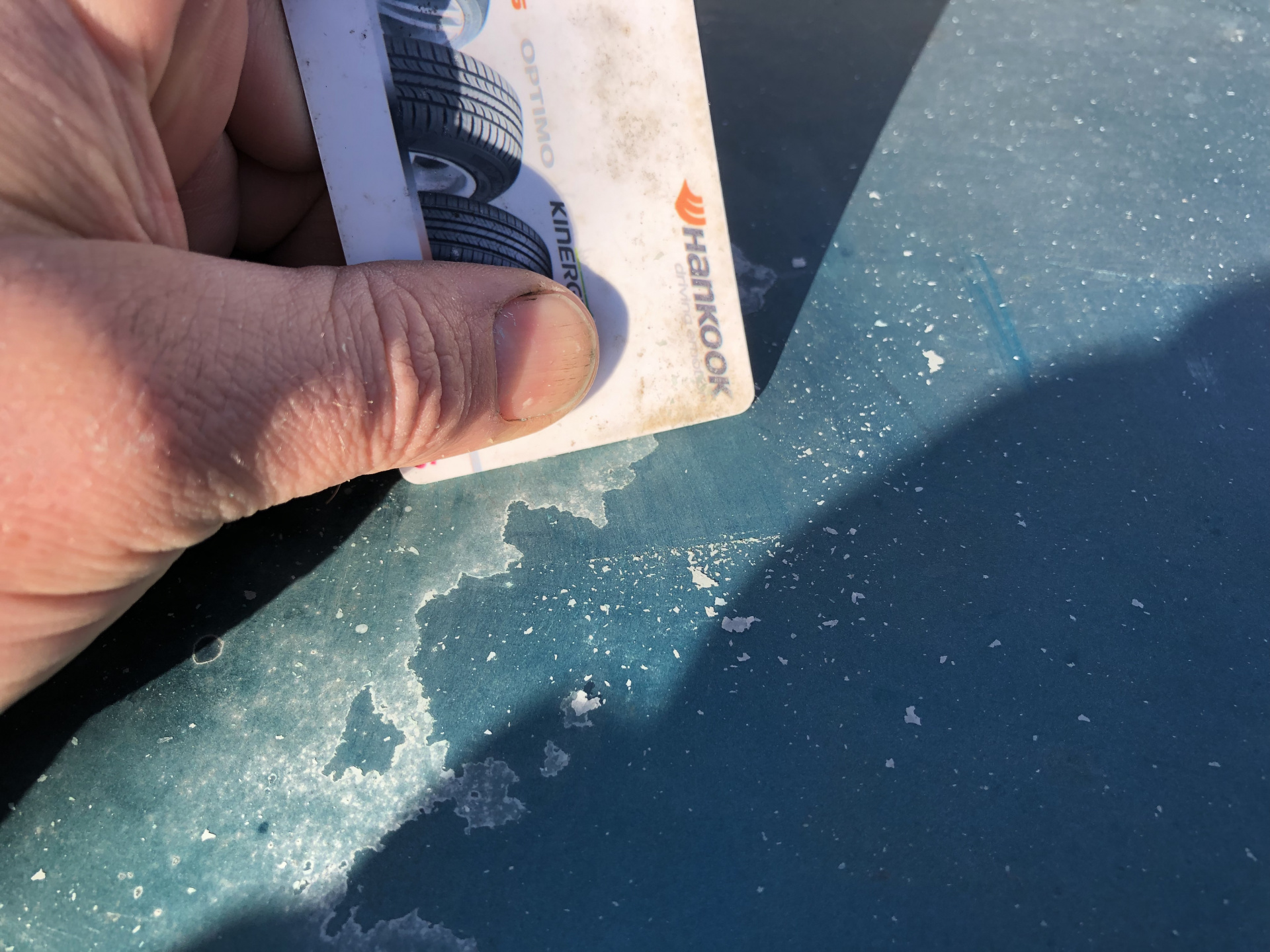 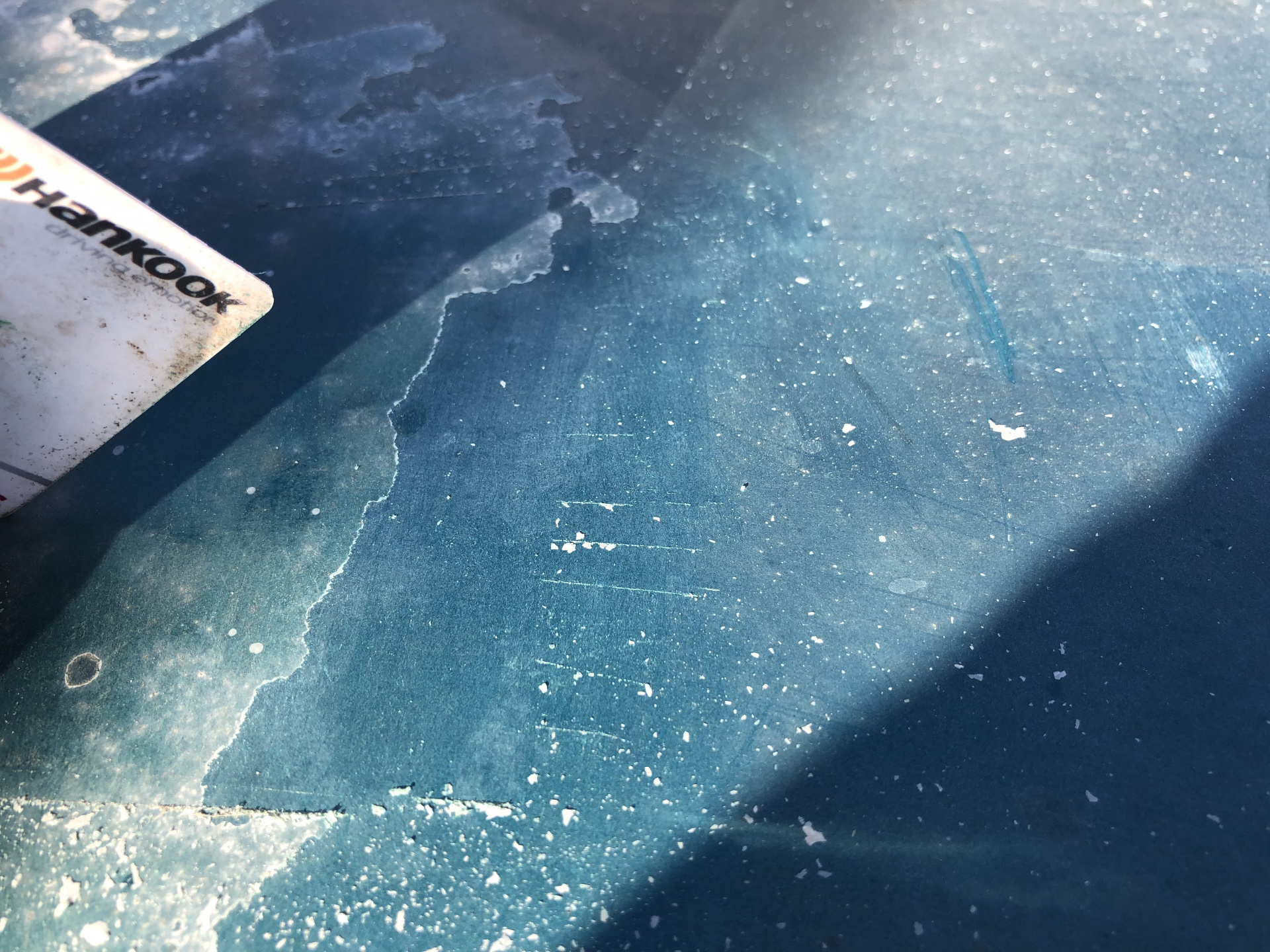 I have removed about half of the clear so far, but the less-damaged clear is harder to remove and needs more thought before I charge in! 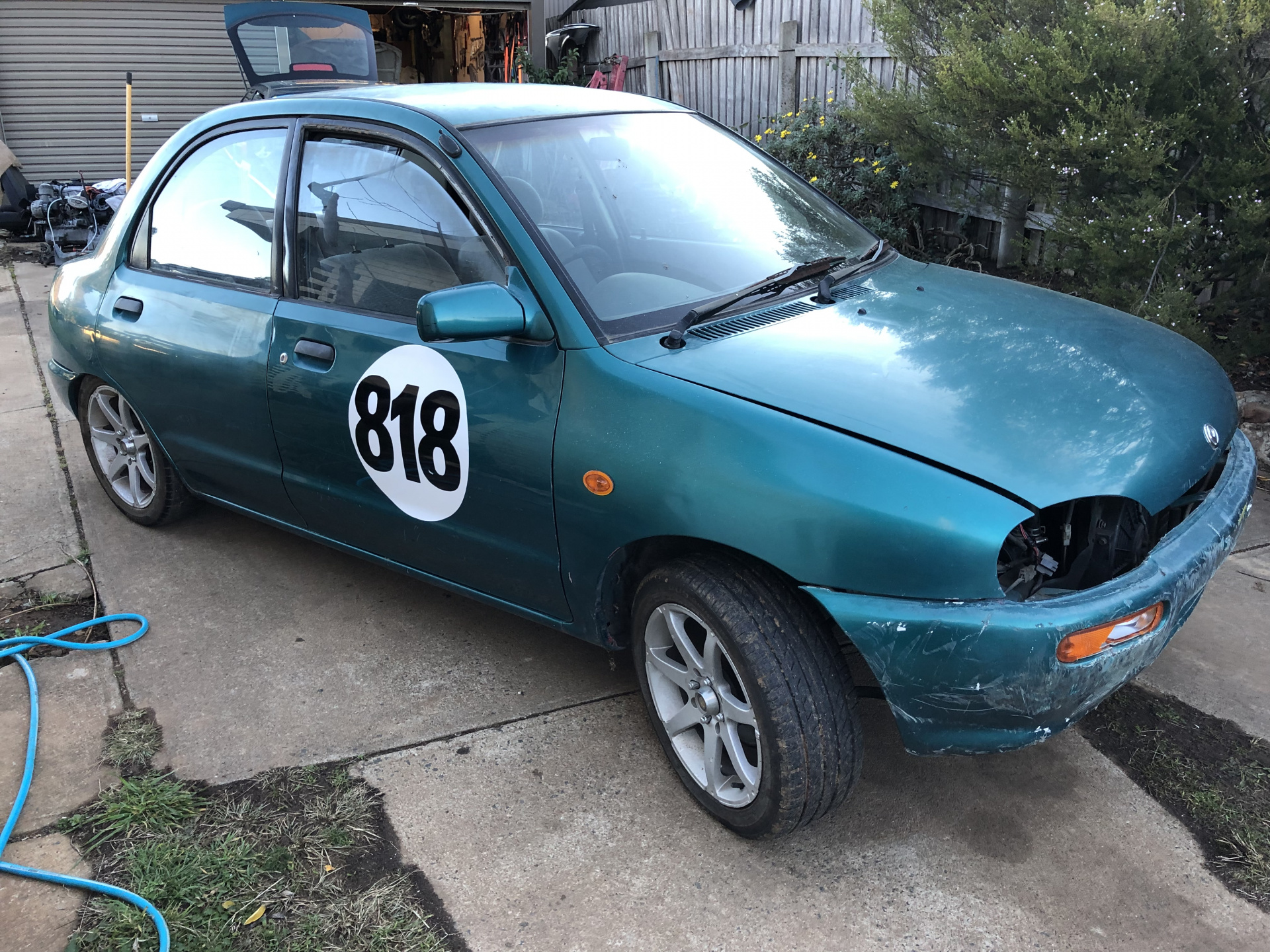 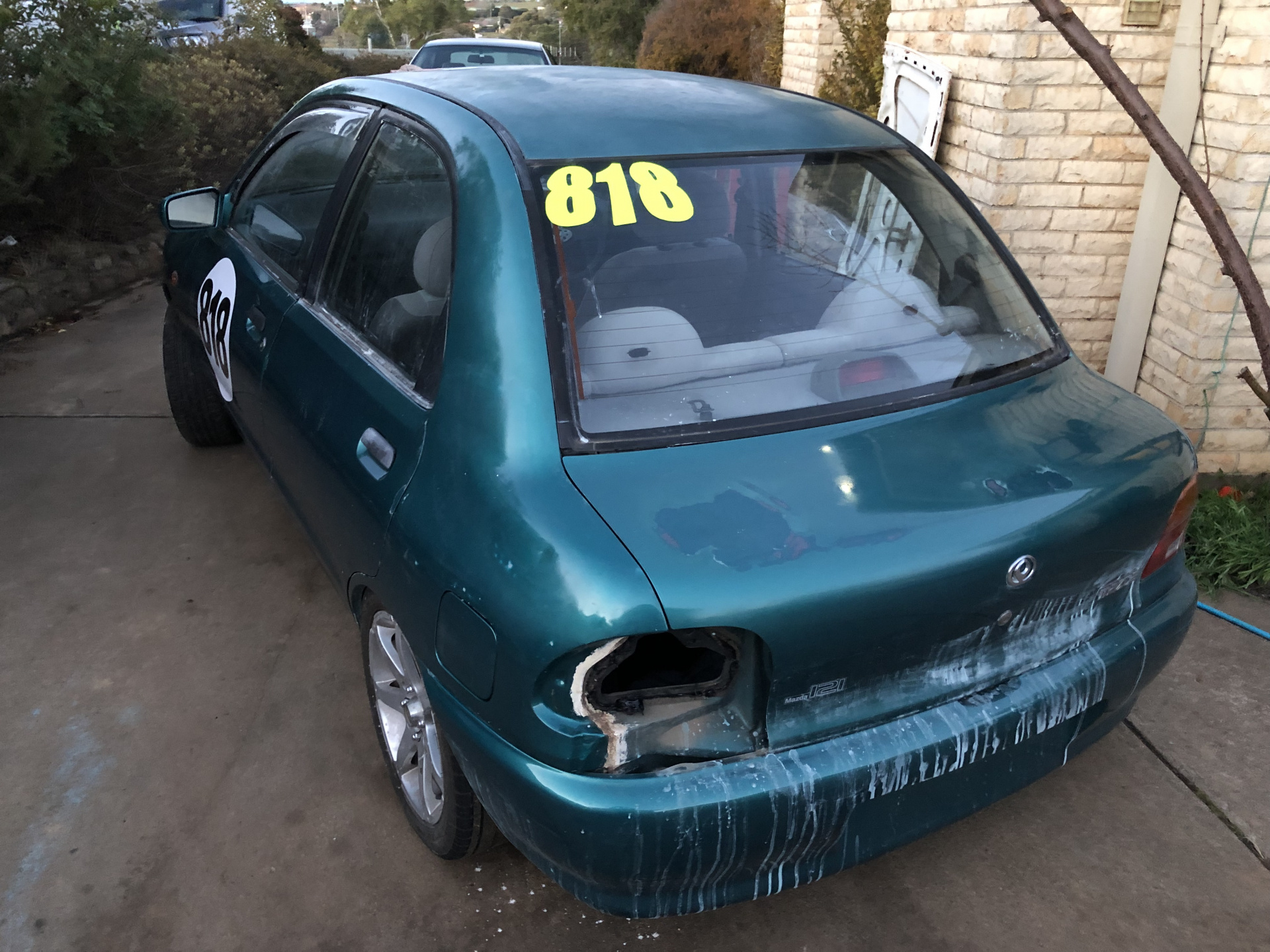 The return of the 8-ball numbers are a hint to how seriously I am taking this!